on March 20, 2020
I ran into an error during an SMTP matching excercise while merging Active Directory accounts with existing Azure AD Accounts for an Office 365 project I was working on. The account would just not sychronise.


Unable to update this object because the following attributes associated with this object have values that may already be associated with another object in your local directory services: [ProxyAddresses SMTP:user.name@domain.com;].  Correct or remove the duplicate values in your local directory.  Please refer to http://support.microsoft.com/kb/2647098 for more information on identifying objects with duplicate attribute values. 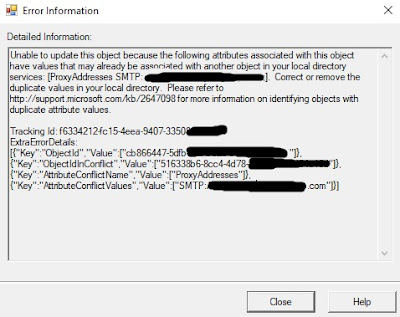 I confirmed that the users UPN was the same as the sign-in name within Office 365:

After checking that, I checked the user didn't already have an immutable ID:

Checked they did not have an account in deleted users that could be causing the conflict and SMTP match to fail:

The users mail attribute matched their primary SMTP address in EOL (using the Mail attribute as Exchange is not deployed within the environment). This is correct but Azure AD Connect was still complaining.

I then found the user had the Global Admin role assigned:

After removing this role the account synchronised correctly and we were good to go. I added the role back following the synchronisation.

Exchange HCW8078 - Migration Endpoint could not be created.

Recently during an implementation of the Hybrid Configuration Wizard I came across the HCW8078 error, this is now the 3rd time I've come across this so thought I'd make a note for everyone else. This happens with EOL cannot talk to the MRS Proxy service and created the following errros in the HCW log file: HCW8078 Migration Endpoint could not be created. Error details: The HTTP request was forbidden with client authentication scheme 'Negotiate'. --> The remote server returned an error: (403) Forbidden. Using the  Test-MigrationServerAvailability  command we can test access to the MRSProxy  Test-MigrationServerAvailability -ExchangeRemoteMove -Autodiscover -EmailAddress user@domain.com -Credentials ( Get-Credential ) As we can see this failed: After checking that the: MRS Proxy is enabled Microsoft Remote Connectivity Analyzer  https://testconnectivity.microsoft.com/ Authentication is configured correctlyOther checks -  https

SSPR 0029 We are unable to reset your password due to an error in your on-premises configuration.

This was one of those annoying ones that took hours (days) with Microsoft to resolve.  We're sorry We cannot reset your password at this time because of a problem with your organisation’s password reset configuration. There is no further action you can take to resolve this situation. Please contact your admin and ask them to investigate. To learn more about the potential issue, read the article  Troubleshoot password writeback. If you'd like, we can  contact another administrator  in your organisation to reset your password for you. Additional details:  SSPR _0029: We are unable to reset your password due to an error in your on-premises configuration. Please contact your admin and ask them to investigate. EVENTID 6329 -  An unexpected error has occurred during a password set operation.   "ERR_: MMS(5624): E:\bt\863912\repo\src\dev\sync\ma\shared\inc\MAUtils.h(58): Failed getting registry value 'ADMADoNormalization', 0x2 BAIL: MMS(5624): E:\bt\8

Working for a client we run into numerous issues where we were seeing sluggish performance when migrating mailboxes to Exchange Online, here are a few of the troubleshooting steps we went through. (The actual was being caused by some barracuda load balancer devices which we had to remove out of the migration path.)  Ensure the Exchange servers are patched with the latest CU Ensure all flood mitigation, SSL offload, traffic inspection and any IP connection limits are removed from the firewall connections to mail.domain.com (including TMG) Review Migration endpoint and ensure that  MaxConcurrentMigrations are set to a reasonable number for your infrastructure, currently using 35 and 25 MaxConcurrentIncrementalSyncs  (use  Get-MigrationEndpoint | fl  to check.) Ensure that the correct AV exclusions are in place as per - https://docs.microsoft.com/en-us/exchange/anti-virus-software-in-the-operating-system-on-exchange-servers-exchange-2013-help ? (There is a PS script that wi

Recently when configuring an Exchange Hybrid deployment for a client I ran into an error during the Hybrid Configuration Wizard: HCW8077 Tenant organization is dehydrated.  Try running the Hybrid wizard again and if the issue persists contact support to remediate this issue. After running the HCW again this still failed. Connecting to Exchange Online via Powers hell we can see that the tenant in in fact Dehydrated : More detial around this can be found here - Office 365 Command You Tried To Run Isn’t Currently Allowed Due To DeHydration   To resolve this you should be able to run the following Set-ExecutionPolicy RemoteSigned -Scope Process $UserCredential = Get-Credential $Session = New-PSSession -ConfigurationName Microsoft.Exchange -ConnectionUri https://outlook.office365.com/powershell-liveid/ -Credential $UserCredential -Authentication Basic -AllowRedirection Import-PSSession $Session ##note: Once prompted for username and

If you have configured Azure Active Directory Connect to use Seamless Single Sign on and are having trouble with signing on ensure the following: You are logging onto a Domain Joined machine connected to the corporate network, the machine must have line of sight to a Domain Controller to request a Kerberos ticket. The following URLS are added to the Local Intranet zone via GPO (User Configuration\Administrative Templates\Windows Components\Internet Explorer\Internet Control Panel\Security Page by modifying the "Site to Zone Assignment List") https://autologon.microsoftazuread-sso.com https://aadg.windows.net.nsatc.net Enhanced Protected Mode is disabled (Computer Configuration\Computer Policy\Administrative Templates\Windows Components\Internet Explorer\Internet Control Panel\Advanced Page\Turn on Enhanced Protected Mode) You can use klist purge to purge the Kerberos tickets, then  klist get AZUREADSSOACC to ensure that you can receiver a Kerberos ticket

Recently working for a client as part of an Exchange 2013 Hybrid deployment with centralised mail transport they were not receiving email at EOL from their on-prem environment. An " 454 4.7.5 certificate validation failure " was logged on the server. I found the problem was due to the configuration of the TLS certificate. They were using an mail.domain.com cert for their CAS server/URL's but had a *.domain.com certificate on their Edge server's. I resolved the issue by installing the wildcard certificate on the CAS boxes and re-running then Hybrid configuration wizard, but I could of also installed the mail.domain.com certificate on the edge servers. Another issue it could have been if the certificate had expired/renewed and the send connector had not been updated. which is documented by David Smith at -  https://texmx.net/2014/08/19/update-send-connector-ssl-certificate-for-hybrid-configuration/ Open Exchange Management Shell on the on-premises Exchange serve